During a short stay on the winterly Baltic coast in Gdansk, I saw while walking accross the beach this water-slide seasonally set out of order. It seemed to be in some kind of hibernation, surrounded by some metal sheet fences waiting for the warm days coming someday.
Later in the studio as I looked on the photos shot there I found that it would be a nice challenge to set up all this scene in 3D in the free hours between the commisioned projects. Such a free project is always a good oportunity to learn, test some new tools and settings: In the commisioned projects usually there is not enough time for it. The inspiration: One of the original photos taken on the “site”. It was convenient to have a serie of photographs as a documentation, particularly for the modeling of the waterslide construction

Usually in our workflow we do much as postwork, use photos to set up parts of the landscape or put cutout plants into the scene. We like this creative freedom not to set up all in 3D, to work more by feeling than to adjust all the technical parameters of the 3D software. It´s more like painting an image or make a collage. In addition, often the time in a project matters and as we are rather experienced using photoshop, it´s just the faster way for us…and more flexible too, when in the finish some parts have to be shifted some meters to the right or just deleted… Here I decided to go the other way and build up all the scene as CGI (computer generated image) to see what will be possible. Only people are inserted as 2d objects. We use more and more 3d-humans too (not for the foreground!), but the choice is still very limited .

The scene in 3D: The sea, the sandy beach, to the left some dunes and a grove of trees, the waterslide. I decided to add two fenced zones, perhaps some parts of this small amusement architecture are stored there.

View from the Sea :
Cloudy and foggy with slight wind. This is a clay perspective of the first image: The view from the sea.
One of the main tasks here was to set up the waves the right way as I wanted a rather calm atmosphere and then to find the right texture to adjust the water material. An important step here was also the adjustment of the slight fog.
I found a rigged model of a seagull (without a texture, so it had to be painted first on the base-bird) so I could generate 10 different ones just changing the position of the wings. 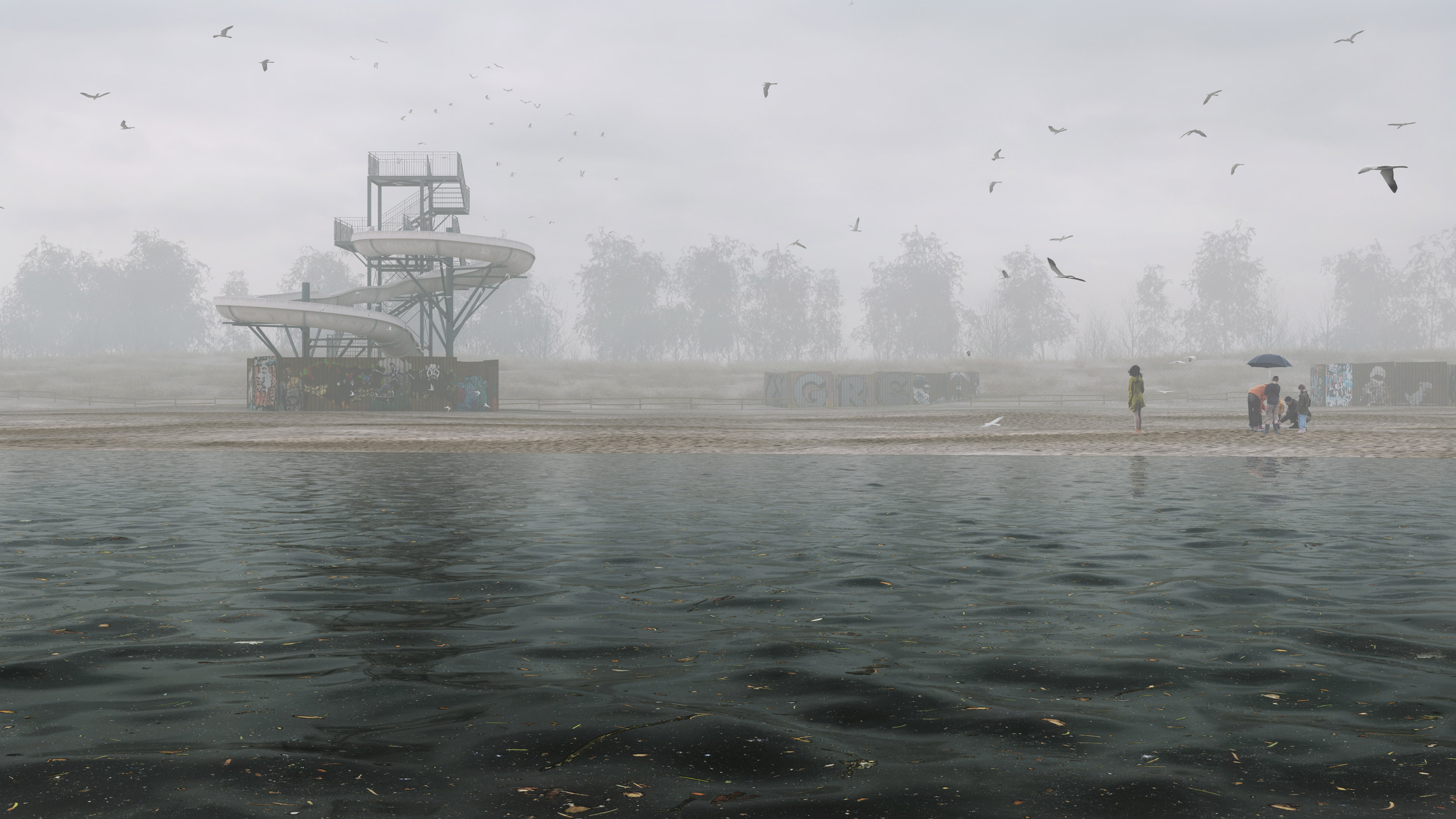 Again a clay view:
Usually I would add the rain in postwork, the drops as a 2D-texture, so it was some kind of challenge to set it up directly in 3D: I experimented a little with motion blur but ended up with a variation of 6 different drops already stretched vertically and then scattered over the scene. I was not sure if birds fly in the rain, but they can! Clay image again:
Some adjustments to the dune plants, as we were a little closer now…I had also to move some of them manually: They were scattered randomly before and should now be better adjusted according to the camera for a balanced composition
The material of the slide-construction can be better seen here: The main material is set up from 3 different ones using the noise-shader to create the interruptions: The base is a matt metal with some added rust and then a slightly faded lightblue paint. The last two ones: An overall view and a close up. The close up has a nice backlight (all lightsetups with HDRI) that plays well together with the translucent SSS material used for the tubes of the waterslide. Software used: Vectorworks for the modeling of the slide, Cinema 4D + Coronarender, Forester for plants and birds, Hot4D for the waves This site uses cookies: Using this site means you´re Ok with this. Find out more.